Honestly, it’s such a tawdry read I’m almost embarrassed to say I read it. 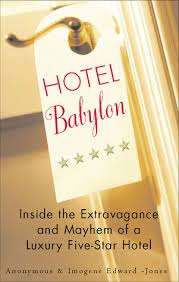 Hotel Babylon is an atrociously voyeuristic account of a 24-hour period in one of London’s five-star hotels. The storyteller, we are told, is an employee working a double shift on the reception desk. Though it’s more likely an accumulation of experiences over a much longer period of time – condensed in this form for the sake of a good read – it still provides insight into the high end of the hospitality industry. You just have to sort through the embellishments from the facts.

Where the book redeems itself is in the glimpses it provides into the experience of hotel workers, especially those who inhabit the back end of these establishments. At one point, the author sits in the staff cafeteria amongst a group of ‘chambermaids’ on their lunch break. What he observes is telling.

These women all work hard and, for some reason, they seem to take pride in what they are doing.  Why they would take pride in putting a chocolate on someone’s pillow or placing a facecloth at the correct forty-five-degree angle from the basin, is anyone’s guess.  But apparently they do.  I take a bite of my bread, and thank my lucky stars that I don’t have to deal with skid-marked sheets for a living.  At least, I have the possibility of moving on and up in my job — to duty manager and possibly to manager.  Working in a hotel is all I ever wanted to do from the age of six.  I swear it was a childhood dream of mine, to work my way up and maybe have a hotel of my own one day.  But these women sitting opposite me can’t even dream.  It’s terrible: they are destined to clean up after other people forever.  Chambermaids don’t get promoted; they just get fired.  Even the head housekeeping job is usually given to some girl on a management traineeship.  Chambermaids start cleaning up toothpaste, and they end cleaning up toothpaste.  They get their four and a half pounds an hour, their two to three meals a day, and the occasional fiver from some passing American.  It makes me depressed just sitting here.